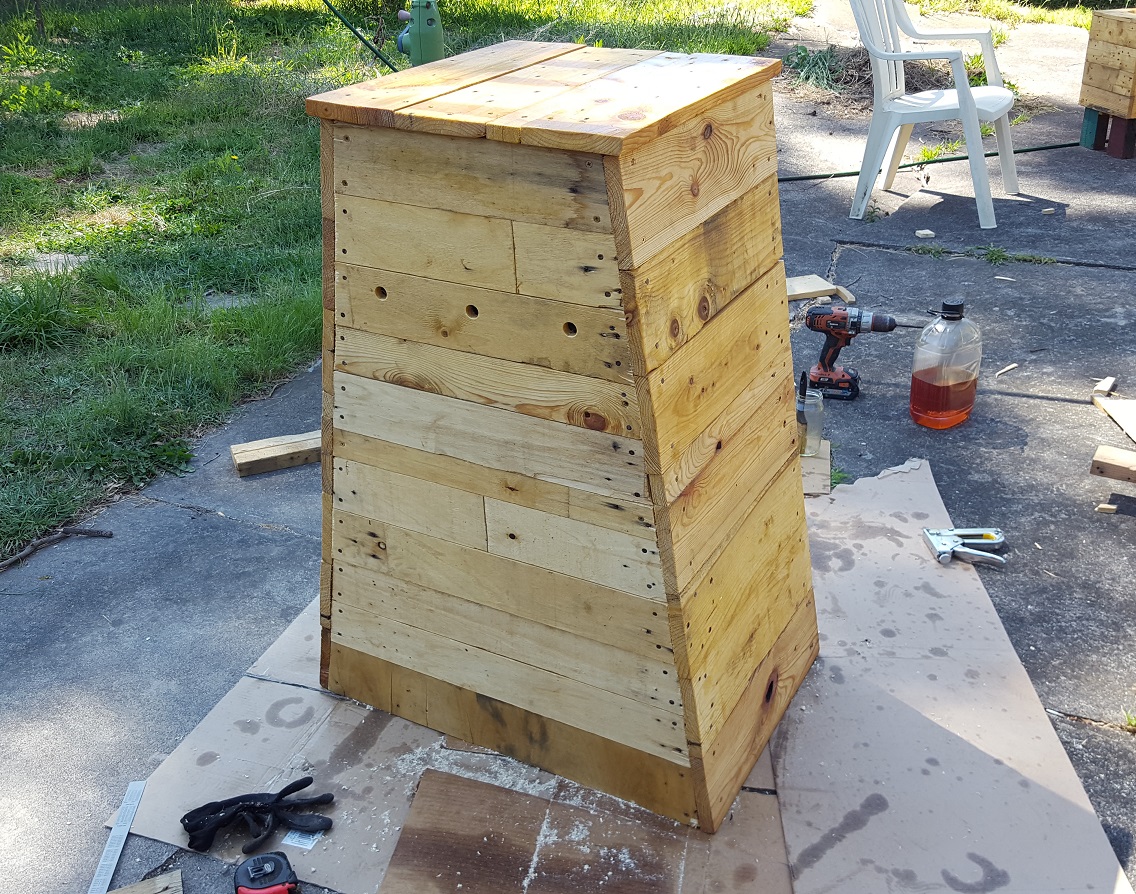 Here’s the tutorial on creating a cool looking, sustainable compost bin! Don’t be scared by the sloped sides and sweet angle, you won’t need to measure or cut any diagonals, this is quite easy to build. Check this YouTube video to see the results:

A note on composting.

There are two main types of composting, ‘Hot’ and ‘Cold”.
Compost generates heat as it decomposes, and if you make your compost bin/pile large enough (around a cubic meter) it will stay hot and compost a lot faster if you make sure it stays slightly moist. As this tutorial is designed for general home use, it’ll be a Cold compost bin – there won’t be enough organic waste material to maintain a Hot compost bin. If you have a massive garden and are constantly generating green waste, it would probably be better to build a larger composting solution.

Once you are happy with the angles of your legs, put another screw through the slat into each leg. Having two screws on each join will lock the legs into position.

Don’t try to cut your slats to length yet, just attach them with as much overhang as possible. Everything that sticks out past the legs will be trimmed off, and most of the larger lengths can be used to clad the other side of the compost bin. If your timber has damaged or ugly bits, make sure they overhang the frame and get cut off.

As you can see in the picture, I left the last thin middle slat off. This is so I can cut it from damaged/offcut timber later on – that I couldn’t have used elsewhere.

While trimming, try and angle the handle of the saw slightly outwards (saw handle a centimeter or so to the left if cutting in the direction pictured). This will make the timber slats slightly shorter than the frame, and in this case shorter is better than longer! Don’t worry about scraping the side of the legs too much, The legs cannot be seen later.

Time to build the second side!

The width of the bin is up to you, but I made this bin 500mm wide, so that every piece of pallet timber I had was definitely more than twice as long – meaning I could get two slats out of each piece of timber.

First, a note about using cheap timber for lids. If you’re wondering why this lid seems over-engineered, that’s because it is! Lids get the worst treatment – water pools on them after rain, they get more sun, they get moved around, and they don’t have a large solid frame along 2 axis like the rest of the structure. If anything in this project was going to twist and buckle over time, it will be the lid. Read this whole section before making the lid, I forgot to trim the corners off my lid beams before attaching them. See below!

After getting the two edge slats in place, fill in the missing center pieces. It’s recommended you cut timbers to size and make sure it all fits nicely BEFORE screwing them in, so you can wiggle them around a bit if they don’t fit perfectly, and average out any gaps.

Paint or oil it!

I recommend laying the bin on it’s side and painting the top part, then rolling it around as you paint each side. This way gravity helps extra oil seep down into the corner joins. Spread it on! As you can see here I slid a piece of scrap under the compost bin. This is to hold that side off the ground, as it is freshly oiled as well.

Pay special attention to the bottom of the compost bin. The edge of the walls and the feet will be resting on the ground, so will get wetter than the rest of the bin, and stay wet longer, so give it some extra juice! Remember to get the inside as well! This isn’t just for looks, you want it to last as long as possible.

Let’s line it with plastic!

I used staples to fix my plastic into position. These bottom ones will eventually rust away – but the ones on the top will hold for much longer, so it won’t matter. If you want to secure it more permanently, screw a strip of scrap timber along the edge (shown- but not screwed). I didn’t have any short screws left, so staples it is!

After you’ve got one face of the plastic secured, move up the sides, securing the loose bits. Once it looks pretty good, flip your bin over and repeat the whole plastic process until the whole inside is covered.

I’m going to use three 20mm holes on both sides, but if you have a large family or generate a lot of green waste, it wouldn’t hurt to drill a few extra. More airflow will speed the composting process, so you’ll have more compost ready by the time the bin fills up. Watch out though, too many holes and non frequent green waste will let your compost dry out – so it’s a bit of a balancing act.

I rolled up some spare chicken wire as my separator, it should provide good airflow through the compost heap. A lot of people suggest using a PVC pipe with slots cut in it – which would last much much longer than chicken wire – but I couldn’t afford this. The cheapest way would be to throw in some sticks on various angles – that should keep the pile reasonably well separated.