Dams are used to both raise the available water pressure, and store vast amounts of water to ensure steady electrical generation.
Dams and reservoirs can have severe environmental impacts, and these must be carefully considered. In general, dams are not recommended for sustainable purposes, although compared to fossil fuel based alternatives they are arguably advantageous. 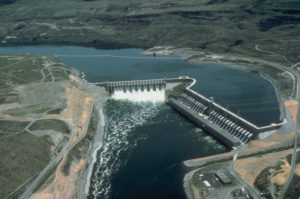 Lower layers of still water in a reservoir can lose their oxygen, leading to anaerobic degradation of organic materials on the bottom. This results in Methane, a more powerful greenhouse gas than carbon dioxide.
When large areas are flooded to create a dam, large amounts of methane is produced, equal in greenhouse gas emissions to that of many fossil fueled power plants.

According to the estimates of the INPE researchers, dams are the largest single anthropogenic source of methane, being responsible for 23% of all methane emissions due to human activities.

Many species that rely on rivers and streams for their reproductive cycles need to be able to move up and down stream, such as salmon and trout.

Sediment that flows from upstream in every river can be blocked by dams, where it falls to the bottom and reduces the capacity of the dam.
The water that flows out of the dam then drops no sediment downstream, but only collects it. This results in erosion.

Many ecosystems rely on season flooding or melt water, Interruption of these natural cycles can severely damage or destroy wildlife and biodiversity.