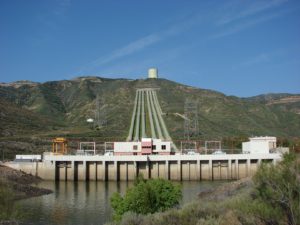 Pumped storage is the largest-capacity form of grid energy storage available, and, as of March 2012, the Electric Power Research Institute (EPRI) reports that PSH accounts for more than 99% of bulk storage capacity worldwide, representing around 127,000 MW.

For the amount of energy stored, there are relatively few complicated or highly engineered parts compared to other energy storage systems. The initial construction costs are quite high in both investment and embodied energy.

In the U.S., the existing 38 pumped hydroelectric facilities can store just over 2 percent of the country’s electrical generating capacity.  That share is small compared with Europe’s (nearly 5%) and Japan’s (about 10%).  But the industry plans to build reservoirs close to existing power plants.  Enough projects are being considered to double capacity. – Scientific American 2012