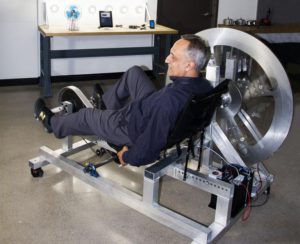 One of the best aspects of harnessing human power is that a large amount of well designed exercise equipment already exists.
Most of the challenge associated with generating muscle electricity is in the engineering and ergonomics of the equipment, rather than the act of attaching a DC motor to it.
You’ll often see articles in the media saying that static bike generators are an amazing innovation and will save the world, but at a basic level, humans are either lazy, or cannot afford to buy a commercial device.

A trained cyclist can produce about 400 watts of mechanical power for an hour or more, but adults of good average fitness average between 50 and 150 watts for an hour of vigorous exercise. A healthy well-fed laborer over the course of an 8-hour work shift can sustain an average output of about 75 watts. – Wikipedia

100 watts is not a negligible amount, and is especially worth investigating if you already exercise regularly. If you are considering such a device, reclined bicycles are far more efficient.