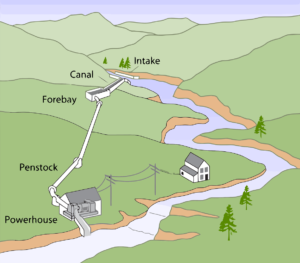 Run of the river hydroelectricity differs in that no dam or reservoir is involved, eliminating many ecologically destructive drawbacks cause by other techniques.
Some water is diverted from upstream in a river, it flows downhill through pipes and turbine generators and it then returned to the river.
In small rivers with fluctuating flow rates, run of the river generation may become intermittent.

Large-scale systems are not entirely green – their construction an maintenance requires roads, bridges and transmission lines as well at the pipes and turbines themselves. However, this impact is far smaller than if a dam or reservoir were involved.